Dear customers, friends and visitors to this site,

Autumn has faded away and winter has arrived at Honey Moon.  We think that this little haiku sums up the transition nicely…

Nature takes a sigh,
The air lets out a deep breath.
We reach for blankets. *

…except that we would substitute “blankets” for beanies!

Our vines are now asleep and it is pruning time … hence the need for beanies – as well as sharp secateurs, good company and interesting podcasts.  And the reward of a good glass of wine at the end of the day.

Pruning is where it all starts and pruning time is when we make decisions about the wines we envisage making during vintage 2021.  The annual cycle of the vine just keeps rolling around, as is its nature.

Throughout the last part of autumn and at this stage, the beginning of winter, we have enjoyed really wonderful rainful:  plenty of it; not too much at a time; thoroughly wetting and revitalising the soil profile; and filling our tanks to overflowing.   A sense of refreshment and renewal after a challenging first half of 2020!

If you would like to enjoy some interesting handmade wines, that come from a healthy vineyard that is loved and cared for by its humans – please consider our wines.  For detailed wine info, head to the Wines section or/and get in touch with us with any questions; to order, simply email or sms us (we will issue an invoice for payment) or use our online Shop. 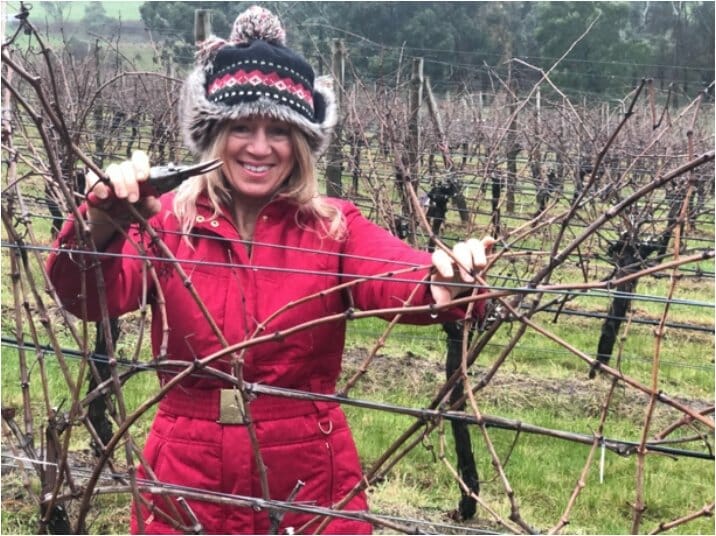 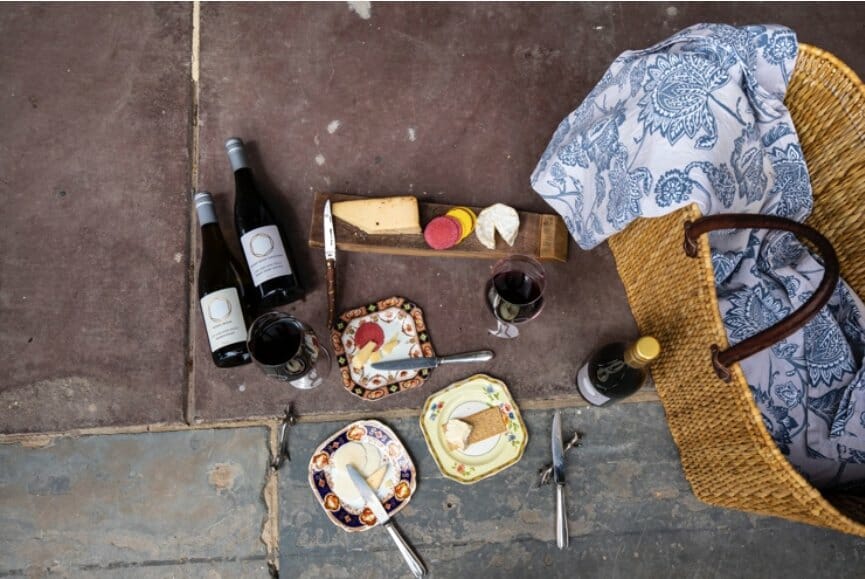 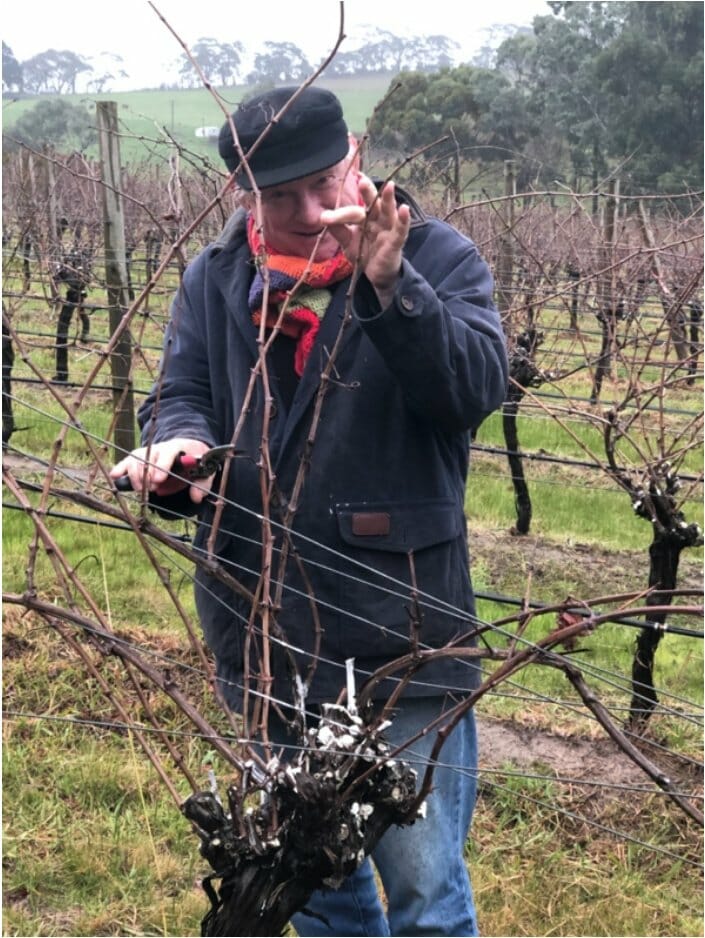 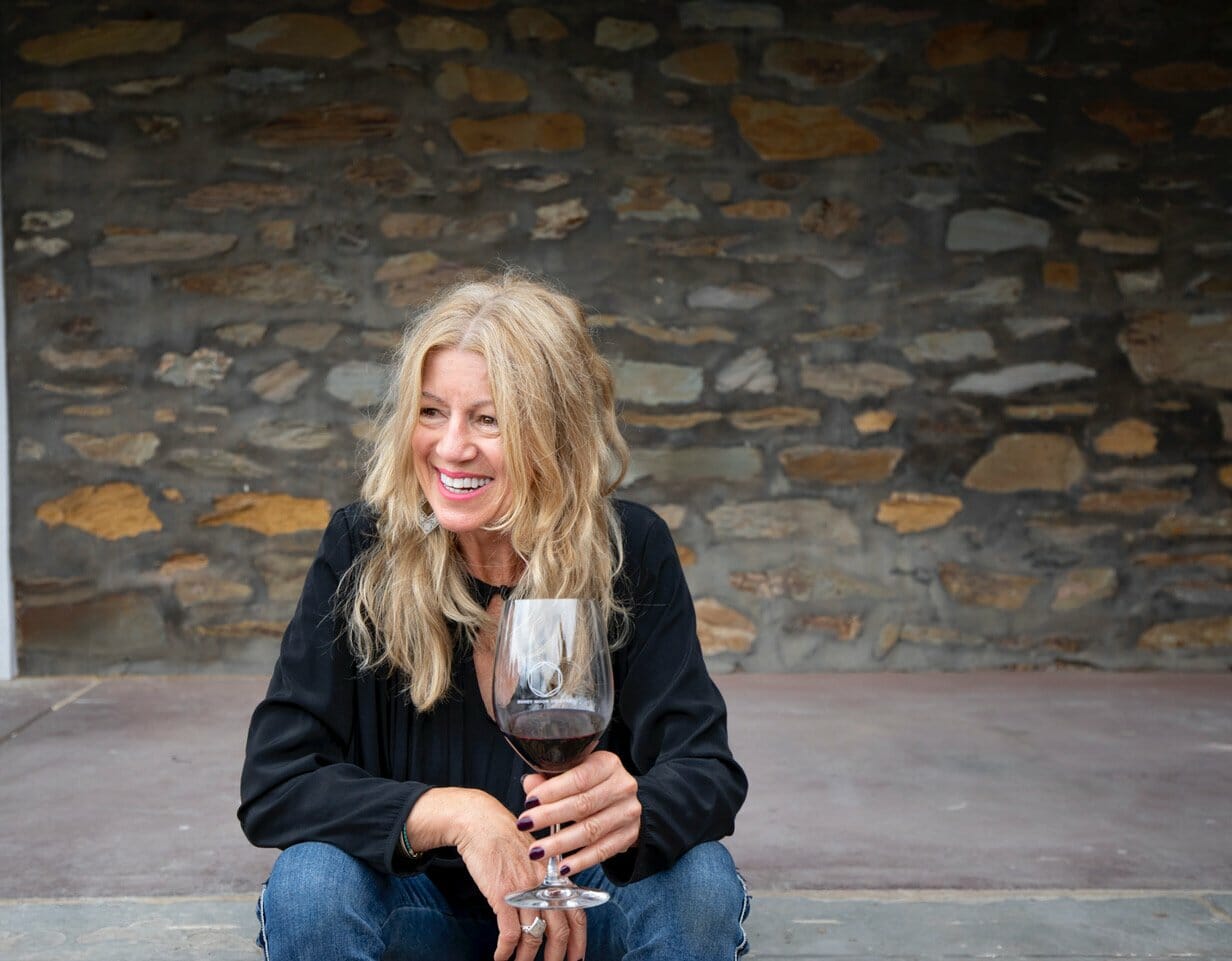 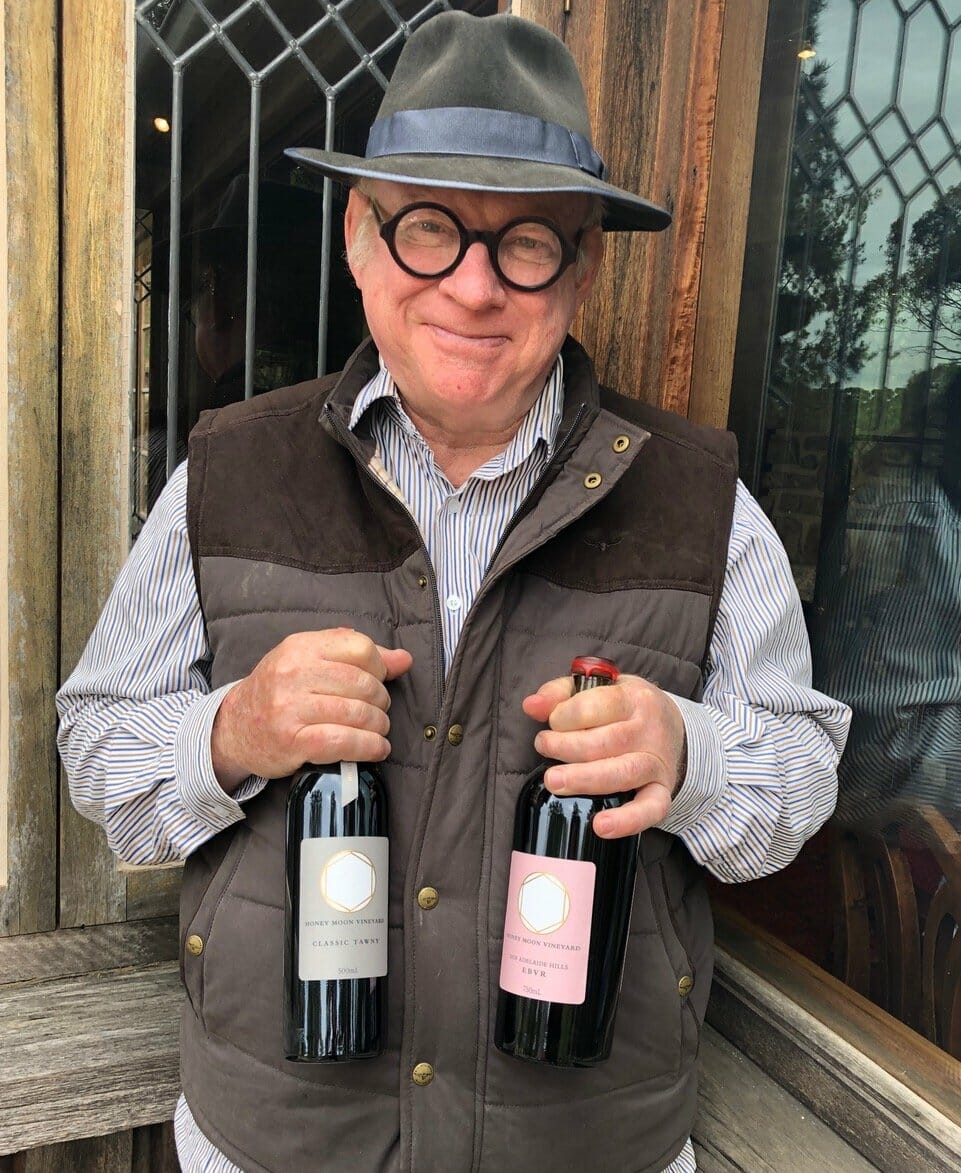 The moon is a striking feature in the landscape, particularly at harvest time, when, as a full moon it appears as a dollop of rich honey in the night sky.  Hence the name.  The vineyard was established in 2004 by Jane Bromley and Hylton McLean in fulfilment of a long held dream to have a small vineyard at our doorstep from which to make small parcels of wine.

Jane had her first experience of an Adelaide Hills wine harvest in 2001, in Lenswood as a cellarhand (at the former Nepenthe, now Revenir winery), working with Peter Leske and his team.  Sometime during this period she was bitten by the “pinot bug”, resulting in an ongoing obsession with the charming but endlessly tricky pinot noir grape vine; and she fell in love with the Adelaide Hills.

She also has a keen interest in the wines and vineyards of France, especially Champagne, and was honored to win the Vin de Champagne award in 2002 after many years spent learning about (tasting) Champagne.  She is an independent educator about Champagne, working with small groups and wine students and was awarded the Diploma d’Honneur Corporation des Vignerons de Champagne (aka the St Vincent’s Award) in 2009.

Hylton McLean is a winemaker, wine science researcher and wine educator of over 20 years.  He has held senior wine-making roles in a large global wine company and, before that, was a lecturer in Oenology at the University of Adelaide and Roseworthy Agricultural College for over 10 years.

The other members of our team are Beau Bromley our chocolate brown Kelpie and Miss Billie McLean – a blue and tan kelpie with loads of cheeky energy.  They are hugely good for morale, comic relief and also for chasing birds in the vineyard.

The Honey Moon Vineyard has a northeast aspect and relatively high altitude for the region (420m to 410m above sea level).

Soils are mainly light brown alluvial loam over a deep layer of red ironstone clay.  On heat summation data, our site is a little cooler than Côte Rôtie and a little warmer than Burgundy.

The vineyard is close-planted and carefully managed to achieve modest yields from healthy vines supported by healthy soil.  Pruning and harvesting are by hand so that the vines and grapes are treated as gently as possible.  By Australian standards the vineyard is small at 2 acres “post to post”.

Science and facts aside, the vineyard is actually a lovely space to be in – it has a calming and peaceful effect no matter how busy or stressed (eg about the weather!) one feels.

Plantings are just over half Pinot Noir and the balance Shiraz.  The Pinot clones we have planted include 777, 114, 115, MV6 and GM18.  While these favour table wines, the 777 from the bottom of the vineyard is integral to our sparkling and Fancy Rosé wines.

The wines of Burgundy are a great passion of ours… as are the Rosés from the Southern Rhône, and Shiraz wines from the Northern Rhône, Hermitage and Côte Rôtie.  Our Shiraz clones are also interesting as they have been chosen as “massale” [field] clonal selections from two old vineyards in South Australia that are known for their spicy Shiraz characters. 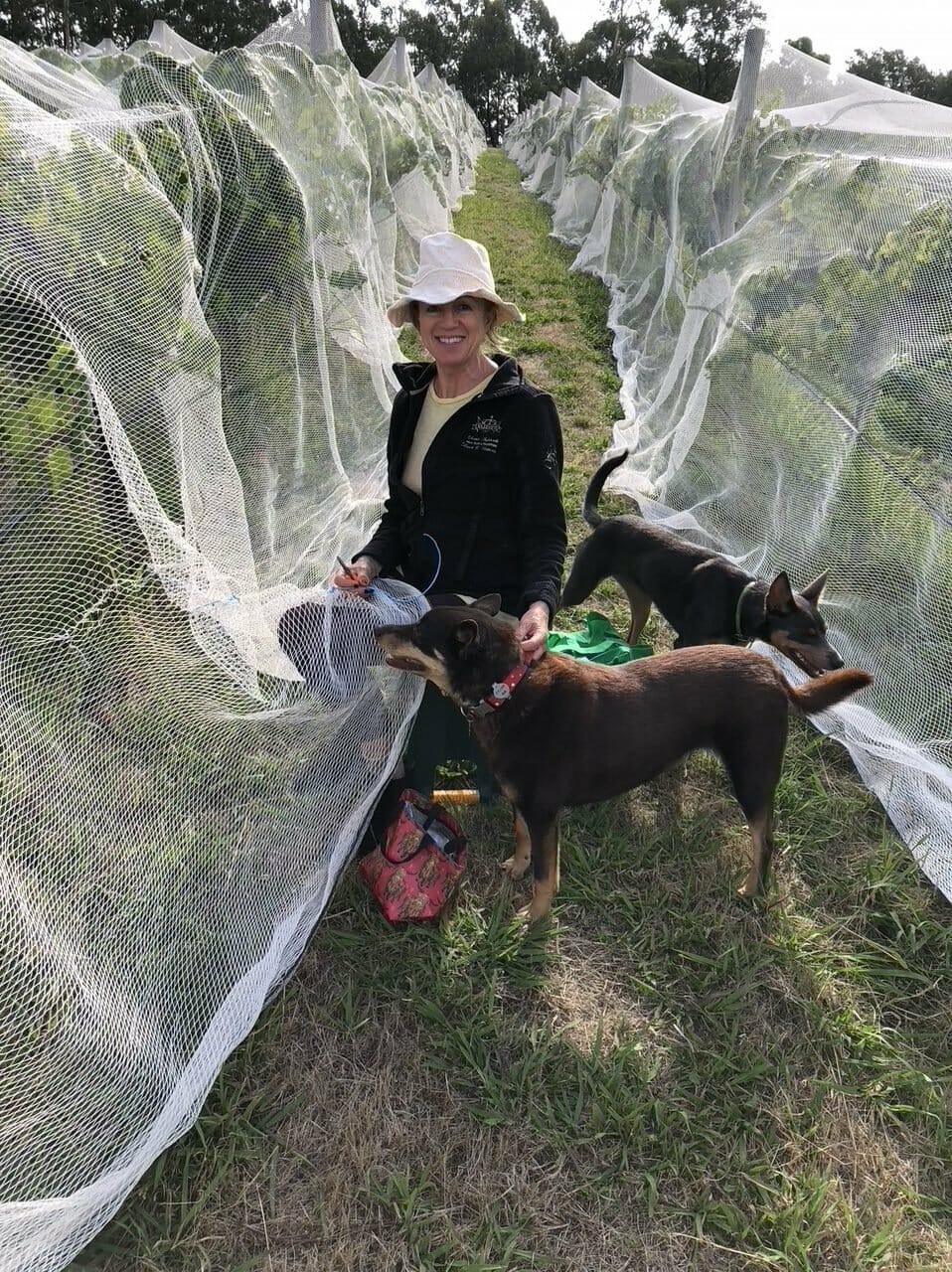 Enthusiastically flamboyant overarching of the Shi

Bay to Birdwood. My first time driving this gorgeo

This brought a big smile - Miss Billie taking a br

Nick Cave and gracefully old Pinot. Balm for the s